Ubuntu 10.04 Lucid Lynx was released two days ago. Yesterday I've installed it on my laptop. As I used beta before I wasn't surprised with a stable release. I'm also not disappointed. It's just great!

Gnome looks slick. I officially stopped using KDE. Well, at least for some time ;) User interface in Ubuntu is consistent and clear. Everything is just in the right place.

One of the most noticeably improved things is usability. I really like the whole social media, messaging and mail integration in the top panel. Also, less experienced users will no longer struggle with setting up multimedia plugins to watch movies or listen to their mp3s. The first moment you try to use a file with restricted format, Ubuntu asks if you'd like to install support for it.

I already wrote about Ubuntu One Music Store while testing beta release. Once I installed stable release, in my music player I directly got songs bought in the store some time ago. Of course I needed to sign into the Ubuntu One in the first place. By default all music you buy is stored on your Ubuntu One disk.

I got surprised by the fact that Chromium is from now on available in the main Ubuntu repositories. You can install it with 'sudo aptitude install chromium-browser' or use Ubuntu Software Center.

If it happens that you're a PHP programmer you might be interested in reading: Setting up a PHP development environment with nginx on Ubuntu 10.04. 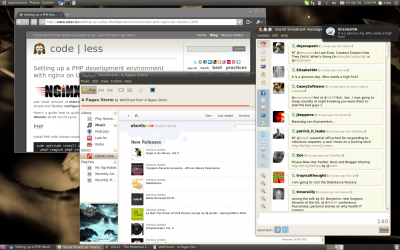