I just played Frets on Fire, an amazing game which managed to absorb me enough to write this blog post. It doesn't happen to often. Frets on Fire is a Guitar Hero clone for PC (runs on Linux, Mac and Windows).

Game is available in official Ubuntu 9.10 software repositories. You can install it with your favorite package manager or just by running the following command:

You should start with funny tutorial included in the game. Playing is really absorbing and I guess it should be even better with a group of people. Key bindings are easy to learn and customize. Everyone should catch it up quickly. Although keyboard is not the best 'guitar controller' and available songs are quite hard, game guarantees a lot of fun.

Once you become a master who plays all the songs flawlessly you might want to try out the song editor. I didn't use it yet. It looks like you can not only edit existing songs but also import it from external files and Guitar Hero itself. 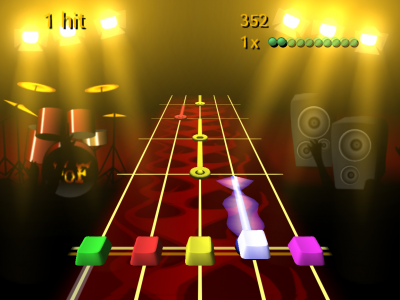